Here’s a long awaited update to the Chuppah-Cabra. I’m almost done with the first border of the Yggdrasil Chuppah. It’s about baby blanket size now.

More pictures after the jump. 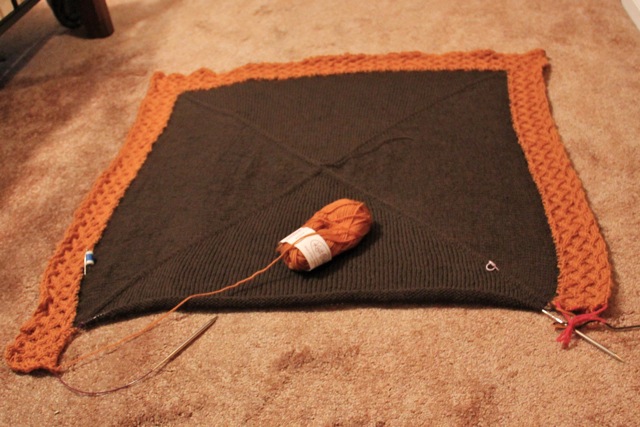 almost done with the first border.

close up of the cable border

Here’s my method of keeping record of time passage and yarn amounts while I work:

I was inspired by Austin Kleon’s Get Yourself A Calendar post. Everytime I finish a ball of yarn, I got to mark it down. Then I realized that I was taking the Chuppah-Cabra everywhere with me, so I decided to keep track of that too. Favorite place so far? The 4 train from Woodlawn to Brooklyn. Cabling on a jostling subway train is quite challenging. I gave up trying to knit once we had to stand.

If you don’t already know Austin Kleon, he wrote How To Steal Like An Artist, which is a great read for anyone in need of a inspiration and a reminder of why we do what we do.

Speaking of cabling, I lost my cable needle in R&T’s couch. I’ve done the last 10 repeats without it, and I think my knitting time has improved due to that.

My goal is to finish the orange border and cast on the next chocolate brown border this week. So far I have three out of ten repeats done on the last side of the orange border. I got a major boost of encouragement from seeing Alana and Rebecca at their wedding shower/party last night. They’re so excited about their chuppah that it rubbed off on me too!